I had to wonder, how did some of these guys not die at 27?  Axl? Slash?  Weiland?  Eddie Vedder?  Greg Allman?  Dicky Betts, Everyone in Aerosmith?  Ozzy?  Anthony Keidis?  Jerry Garcia?  Eric Clapton? Nikki Sixx? Layne Staley?

Layne made it to 35.  How?  I mean, sure… Keidis and Clapton dabbled in acknowledging drugs in songs like ‘cocaine’ and ‘under the bridge’… but Staley wrote an entire album about heroin.  No subtext here:  Sick Man, God Smack, Junkman.  Just a great and beautiful and powerful album all about smack

What about Keith fucking Richards?

I mean… come on – how is Keith Richard alive?  How is the ’27 club’ not simply called the ‘Keith Richards Memorial Club®’?  They each deserve their own paragraph page about how the hell they aren’t dead (or in the case of Weiland or Garcia… how did they make it past 27… or even to 27?)

There will be more here, and more about here.  This is just to get you, and me, thinking.

The first time I saw Pearl Jam, they were unknown… literally.  I saw them in 1990 opening for Chili Peppers and Nirvana (Chili’s were the headliners.  Nirvana was touring on Nevermind… but just breaking at that moment.  They would never open again).  Pearl was the opener behind them two.  I knew the name, but nothing more.  I think ‘Even Flow’ (their first single) was just breaking on MTV… but we didn’t have cable.

In fact, if you see that video, you see how he was.  He would climb the stage rigging and then hang upside down and sing.  He did this at that first show.  He would also stage dive.  Not in a club, mind you, but into the floor of an 18,000 seat arena.  I remember a lot about that show 25 years ago… and almost all of it was about Pearl Jam.  My god, they burned SO bright.  Ed would also come out from the wings during the other band’s sets… and stage dive.  That night, I became a life long Pearl Jam fan… even though I didn’t know the band or the songs.  I saw them 4 times on that tour in Phx… always smaller crowds.  For example, when they played Lolla 2 the next summer, they went on at 2 pm on a week/school day.  NO ONE was there (yet).

Being the odd student of rock history, I knew all about the 27 club even way back then.  After the triumvirate of Hendrix, Joplin, and Morrison in the early 70s… people started taking notice.  By 1990, it wasn’t a secret.  Too bad it just kept  happening over and over.

I knew that night that Eddie Vedder would never get to mature into an elder statesman of rock.  We now know it is mostly drugs and alcohol that kill the 27.  Eddie wasn’t deep into that, which is how he is still alive.  That night, though, I knew he would be dead within 2 years.  His insane recklessness and lack of personal safety regard told me he was a self destructor for sure.  That night, having only known of their existence for 25 minutes (being openers to openers, and having only one album out, their set was short)… I was already pre-mourning the death of Eddie Vedder.

The antics you see in the videos, and the stills above… were not for the camera.  They also didn’t only happen when cameras were on them.  Phoenix, AZ – while being a one of the biggest US cities, is a dead zero as a cultural hotspot.  All the times I saw Pearl Jam in the first couple of years, Eddie did that insane stuff.  I remember thinking, a LOT, “my god, it would be horrible if he fell to his death here.  And there is a 20% chance of that happening.   BUT.. if it were to happen, wouldn’t it be kinda cool to have been there?”

My wife thinks I am sick, and is disgusted by my perpetual success with celeb dead pools.  Like Eddie jumping to his death… I never killed anyone in these celeb dead pools.  You can’t, its one of the rules.  I am just an observer.  In fact,I wrote this piece before she died… the week she turned 27.  Prescient!

Amy Winehouse is 27. Do you know what that means? It means she is going to die! 27 is a very bad year for rock stars. Really bad. It is the age that gets them all. Really, nothing good can happen here. I mean, look at the facts: young, talented, attractive, and over rated. She meets the qualifications. Good luck, Amy. Don’t walk under any ladders this year.

*** oh, side note.  I was able to combine my two passions… err… gifts.  Knowing Amy Winehouse’s lifestyle, and that she was approaching 27, she was a natural fit for the list.  She did die at 27, and I got mad points for it.

Look at this intensity.  That was young Eddie Vedder.  Even on SNL he managed to convey that terror and intensity.  Over the years, the band has often been asked if they feared for Eddie’s safety… and would they be left without a singer (again).  They always answer a resounding ‘yes!’  How did Eddie make it?  Simple.  Never got into narcotics.

*** update Dec 2019, John is back with the Chili Peppers again.  HUGE and awesome news.  I kinda feel bad for the guy who held his spot for last ten years.  His name is ‘Josh’, but that isn’t what he goes by.  Poor fellow… he mostly answers these days to ‘you are no John Frusciante!’  No one is.  The Chili’s have had about 6 significant and lasting guitar players.  Frusciante rises far above them all.  If Hillel Slovak were still alive, you would not have heard of the Chili Peppers.  Just about every single Chili Peppers song you know, Frusciante wrote.

John Frusciante has done so much heroin, you could almost say (as an homage to Chuck Norris)… John doesn’t do heroin… heroin does him.  You don’t recognize the name?  He is the guy who wrote every single Red Hot Chili Peppers song you know.  Let’s take a look at John over the years.  See this guy, below?  Confident, rock star… song writing genius of one of the most successful rock bands of all time.

we LOVE this guy.  I have seen him play, he is all that.  NOW… let’s look at him just a few years later.

Jesus, wtf?  I can only assume a transcript of this interviews involves the words ‘you know?’ more than he blinks.  THAT, kids, is what heroin does do you.  Kinda sad when you consider… with no exaggeration… that the guy he replaced died of an OD from heroin.  John got his job when the late great Hillel Slovak died of an heroin OD.

I don’t want to tell this story out of context.  He appears clean and healthy again.  Look at this more recent photo from Summer 2018.  Look at those two people.  The pic directly above – on heroin.  Pic below, same dude not on heroin. 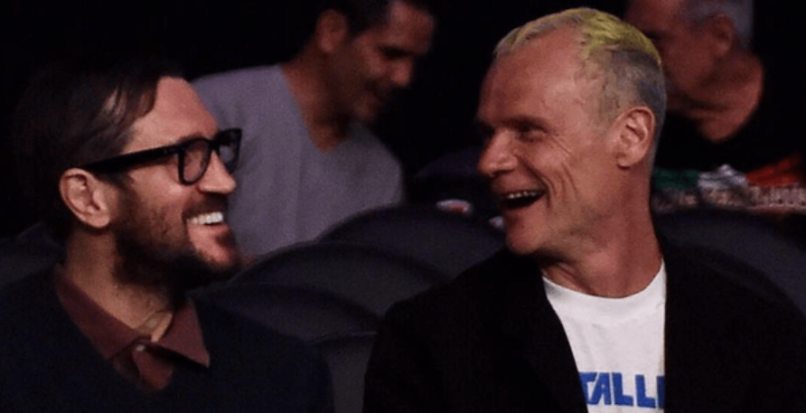 Update – as we all know, John is back with the group again, which is awesome.  Think how tough it was for Flea and Anthony to watch John Frusciante’s descent into heroin addiction.  John was the replacement guitarist.  The original guitarist was Hillel Slovak.  He died of a heroin overdose.  Then, he is replaced with this wonderful amazing guy who truly took the band to the next level.  If John Frusciante had not joined the band, they would never had gotten to their national level.  Frankly, before John, they just weren’t that good.  There was no songcraft.  Sorry… off topic.  My point being they lose Hillel to heroin.  But his replacement is a new beginning for the band.  and they basically lost him to heroin, too.  TWICE, in fact.